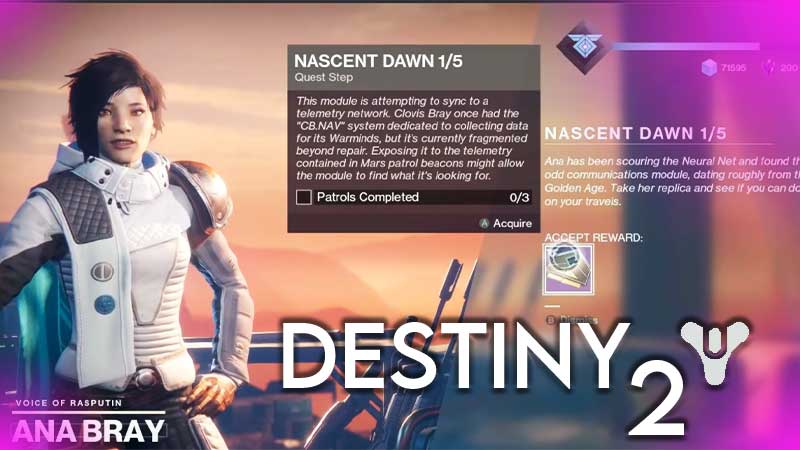 Disclaimer: All of the information made available in this blog is for the sole use of educating the audience about the quests of Destiny 2 nascent dawn. We are not, in any way connected or associated with the game and only offer information that is available for public use.

“Show no mercy! Even Guardians Die. Impress me, and I will show you the path to true power.”

This phrase has become a household thing for gamers as the craze for Destiny 2 is increasing by the minute. One chain, in particular, has been the reason for the popularity of this game. The Nascent Dawn missions come off as a series of quests where players are rewarded with different versions of the infamous Braytech Scout Rifle upon completion.

But completing all the steps of the quests takes a lot of time and effort and at times, due to unclear steps, it can be too much for the players. In case you are looking to work your way through all the steps in sequence to get your hands on the Polaris Lance Exotic, you have come to the right place.

Follow this blog till the end to know all about the steps in a detailed manner to get through the quest.

Easy Guide to Complete All Parts in Nascent Dawn

In case you are planning to move forward with all the quests of Nascent dawn that are in store for you, keep in mind that the quests are reset every week and a player can only complete a single step during that period of time.

Every new part of the quest is given by Ana Bray and on some occasions, players need to show the rewards that they have earned from the previous week’s quest. Think of it like this, in case you have unintentionally broken a gun or any other equipment that is required for the quest, you can buy the same from Ana again.

Let us get right into the 1/5 Nascent Dawn Quest.

During your initial quest, you will be sent to the planet of Mars to carry out several tasks and activities. Something which wouldn’t come as a problem for most of the players. Given below is a list of all the objectives that one needs to complete to get through the first quest;

In the second section of the quests, players have to earn javelin kills and the same can be done in two ways, either with the escalation protocol or by a public event. Keep in mind that one can take part in the heroic adventure only after all the objectives for the Mars quest have been completed.

Players can find the Ma’adim Subterrane lost sector can be located just right to the fast travel point famously known as Glacial Drift. Players will be rewarded with the Braytech RWP MK II scout rifle upon the completion of this step.

Similar to the first quest, after doing all this, simply upload the memory and return to Ana Bray to proceed further with the quests.

A total of 10 escalation protocols are to be completed for the third quest (3/5) of Nascent Dawn. It is not as hard as it sounds as one can simply complete the same by completing the first level ten times or by any other mixture with ease.

At the southern end of the map, you will be able to find the sleeper node in Olympus Descent. To reach there, one can make good use of the cave system that is just below the glacial drift fast travel point.

Upon the completion of Nascent dawn 3/5, players get rewarded with the masterwork version of the popular Braytech RWP MK. II scout rifle.

End the quest by uploading all of the memory of the objectives and returning to Ana Bray. Similar to all the other quests, Nascent dawn 4/5 brings something to the table.

During the 4/5 quest of Destiny 2 Nascent dawn, players will need to make good use of the Braytech RWP MK. II scout rifle to earn different types of kills, successfully complete a special mission on Io, and after the same, find the Sleeper node that is at the top of the Rasputin’s chamber situated just before the entrance. If the players manage to complete the quest, they are rewarded with the prestigious Polaris Lance Exotic scout rifle.

Upload the memory and go back to Ana Bray for further instructions. This is the last stage. Nascent Dawn 5/5 coming right up.

The final part of the quests requires players to complete a plethora of tasks which includes confirming multi-kills with Javelin, the completion of PvP matches, executing a special mission on Mars, and ultimately opening the sleeper node (Alton Dynamo) that can be found close to the number 39 on the all latent memory fragment map.

The Polaris Lance Catalyst is awarded to the players after the completion of this quest.

Finish the quests by uploading the memory and returning to Ana Bray to see how things play out after you are done with the quests.

And there you have it, following the sections mentioned above carefully can help you to complete the quests of Nascent Dawn with relative ease.

Even though it is not a part of the Nascent Dawn quests, the Prince Lance Catalyst can come off as difficult for players to figure out at times. The initial stage is pretty clear where one has to get enough enemy kills, yet the perfect 50 fifth kills part is a bit cloudy for some players.

Moving to the second requirement. This simply refers to the exotic traits of Polaris Lance Perfect Fifth: Precision hits return ammo to the mag. In simpler terms, if you hit four perfect shots, the next round will be loaded in a delayed manner for the explosive hit. It is required that the burn made by the solar explosive when it detonates should kill an enemy so to achieve the perfect Fifth kill requirement.

There is no better place than the Castellum in the Levithan Raid to complete this objective since there are no time limits and the enemies keep respawning in large numbers. As soon as the catalyst has been completed, the Dragonfly will be received by the Polaris Lance, causing the enemies to explode when a precise shot is taken.

Once the players have completed all the parts of the quest of Destiny 2 Nascent Dawn, they can have a new and exotic rifle all for themselves.

We hope that this blog had everything that you were looking for regarding the quests of Nascent Dawn.