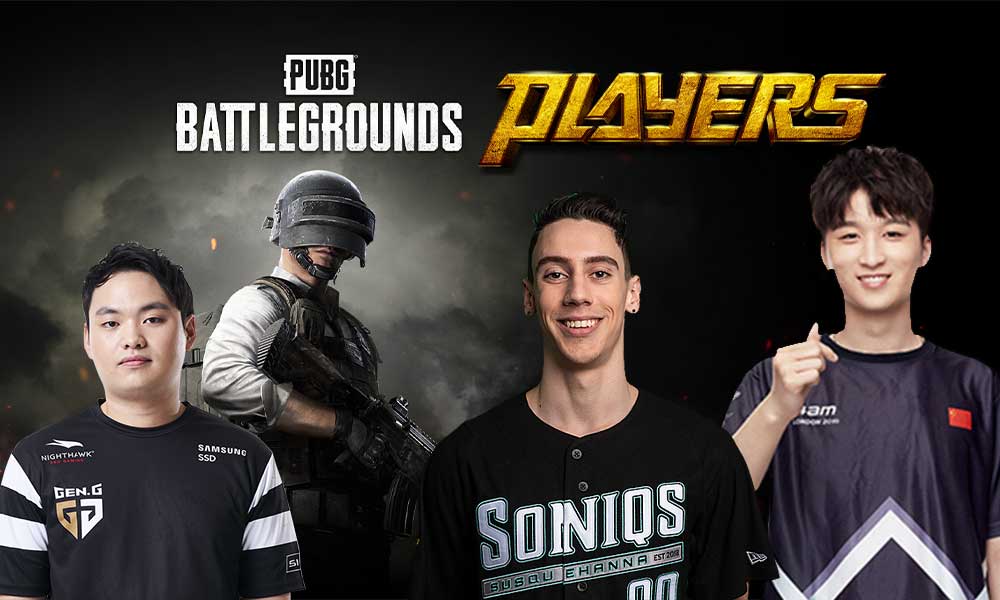 Esports has revived many games and it is no secret that the world-renowned battle royale, PUBG is also one of them. The FPS shooter game is heavily played all over the globe and has also made a phenomenal comeback in the esports division this year.

When everything seemed lost for the beloved battle royale, it came back rising like a phoenix into the competitive gaming scene in 2021. It is common knowledge that every game has a few players that excel every one else in any specific area of the game.

In this article, we will shed light on some of the best players that ever held a mouse and keyboard and made sure that no one did it better than them. But before we get into that you have to keep in mind a few things.

The rankings that we have mentioned below on our list are solely based on performances in major tournaments such as PCS 3, PGIs, and PCS4. After the inclusion of the new Winner Winner Chicken Dinner format in the competitive scenario, it is not certain whether there will be a change in the rankings or not as the format is yet to be implied in full force.

Lastly, keep in mind that these rankings can be subjective.

Top Ranked Players of PUBG in 2021

At Numero Uno is the heart and soul of Gen.G. Cha “PIO” Seung-hoon is arguably one of the best if not the best player the game has ever seen. He is a pretty versatile lurker and rifle expert and has also been the reason behind the clan’s consistency in global and regional tournaments.

What separates him from other professionals is the way he positions himself along with his match awareness that remains unparalleled to this day. Every ridge and every crack in the map come off as a potential preening spot for this in-game leader.

Some of the most notable accomplishments of his career include winning PUBG global championship in 2019, representing South Korea at the Nations World Cup which was hosted in 2019, and the late show by Gen.G at PGIs 2021 where PIO played a major role.

If rifling and fragging is an art, it would be safe to say that TGLTN is the artist. James Giezen, who goes by the in-game name TGLTN is an absolute monster and a veteran of the battle royale game of the highest caliber.

Not many players have tasted victory in close combat and long-range fights alike against this player, and that, along with his elite mindset separates him from almost every other player in the community.

Apart from being a deciding factor in the Soniqs success at PGIs 2021, he has also been a brand ambassador for PUBG and is also a pretty famous YouTube/Twitch streamer/personality that can muster viewership as fans from different parts of the globe stream to show their appreciation as well as to admire the greatness of this genius.

If you ever want to see the best in the business, check out TGLTN and we assure you that he won’t miss the mark.

Forever is highly regarded by many as the most liked player in the PUBG world. Wu “Forever” Zheng comes in at number 3 and is one of the young guns in the competitive world that fans need to watch out for. Similar to the giants on number 1 and number 2, Forever has been the force behind the recent success of 4 Angry Men (4 AM) which is labeled as the most aggressive team in the world.

Forever has managed to earn both the MVP and the most kills trophies in back-to-back tournaments, establishing himself as one of the most interesting young PUBG prospects to watch out for in the coming years.

Fans are eager to see a clash of giants in the upcoming PCS 4 where Pio and Forever will take turns at each other while fans will be excited to see who ends up triumphant.

The journey of number 4 on our list is no less than a motivational story, to begin with. Ivan “UBAH” Kapustin is in everyone’s top 5 list of top esports players that ever graced the competitive stage. The PUBG champion started with Dota 2, which is a strategic game, and then made his way to PUBG.

The man was a beast from 2018 to early 2022 and won numerous global and regional tournaments for the Faze clan. During his reign, he was also instrumental in helping Russia to clinch the trophy of the Nations World cup.

UBAH became a household name in the PUBG setting and the influence of this player was to the extent where Faze clan was often referred to as Ubah and the boys. Sadly, good things do come to an end and so did the reign of Ubah.

After PGI’s, he was benched by Faze and the two went their separate ways. Ubah is currently with Digital Athletics for PCS 4 and is yet to taste silverware with his new lineup next to Sambty and Vard.

Talking about number 5, the guy didn’t even choose PUBG as his first professional and yet is one of the most deadly players out there. Such is the aura of Wei “GODV” Zhen who is often regarded as a true PUBG veteran by players and commentators alike from different parts of the globe.

Wei has been there since day one and is the owner and the captain of the fierce roster of 4 Angry Men (4 AM). He specializes in utility frags and the way he throws them, many fans and players have already named him the Steph Curry of PUBG.

He is also known as a pretty versatile player who can control the tempo of the game while leading the charge of the team in both small and large corners of the map. Arguably the most famous player in China, the giant of 4 AM has represented China at the Nations world cup and has also played PGC and PGI’s 2021. Wei Zhen continues to amaze fans with his breathtaking plays, which justifies his position among the best in the world.

Number 6 deserves all the praise in the world and has cemented his place as one of the most entertaining and technical players in the game after he carried Zenith to 2nd position in the invitational PGI’s on his own.

If we are talking about the skill set of this veteran of the game, there aren’t many players in the world that can match his skills in both spray transferring and close-quarter combats as well. As of late, the guy has been in phenomenal form and has helped Wildcard Gaming, Zenith, and now Oath as the roster recently signed this gem of a player. If you are looking for players that can put on a show on the global stage, Kickstart is your guy. Make sure to keep an eye on him in future events.

At number 7 we have the dominator that has cut the competition from the Korean PUBG seen with his amusing assaulting skills. Na Hee-Joo, commonly known as INONIX, has been running riots in the Korean division of PUBG along with Pio.

The two are arguably one of the most destructive duos in the community. The best thing about INONIX is his ability to hold the fortress for his team, no matter how intense the pressure exerted is from other teams. The perfect example of this can be his 1V3 against Brazil in the Nations World Cup back in 2019.

Gen.G’s gem has always delivered on the big stage and fans are looking to see more of the artistry that INONIX has to offer in the upcoming LAN and online tournaments.

The captain of Virtus.Pro for this season. BATULINS aka Sasha Batulin has been a standout name in the community for a while now. The in-game leader, fragger, and mastermind behind the roster’s success in Europe.

The team Northern Lights set foot on the accelerator in 2020 where Batulin was leading the charge against top European PUBG teams. Ever since then, the team has never looked back and only went from strength to strength in recent months, showing no signs of slowing down.

The team looked like one of the favorites for PCS4 and quite possibly for the invitational global championship (PGS) which will be hosted later this year. The majority of the plays are dominated by Sasha and his perfect in-game callouts.

In case you see Virtus.Pro dominating the competitive scenario, know that the only possible reason is that they have one of the best players in the world. Period.

The name’s Bond, Kurtis “Purdy” Bond. In at number 9 is the in-game leader (IGL) of TSM. TSM acquired the former lineup of Bond, which went by the name STK (Shoot to Kill). Often known as the most self-sacrificing player in the PUBG community, he has made a name for himself by becoming a genuine asset to his team in times of desperate need.

His wacky plays and crafty positioning is what make him stand out from other IGLs. The ex-lineup of STK was always known as an aggressive team that made lives difficult for enemy clans with their ingenious tactics and plays. The majority of the credit for this goes to PURDYKURTY as he makes sure that the team pulls through even if they are at a major disadvantage.

Safe to say that not only is Bond one of the best IGLs on the planet but is also one of the most talented players to ever set foot in the PUBG community.

At the end of our list is Jake Winant aka SNAKERS. The professional PUBG player has made his way into the list with his impressive rifling skills. The players’ insane ability to get important frags for his team is what accounts for his place along with some of the best players in the world. With Jake now being in the same roster as Kickstart who is our number 6 in this list, imagine the kind of threat that the roster of Oath now becomes to Soniqs up back in North America.

What is even more impressive is that just like 4 AM Forever, SNAKERS is also pretty young which is why it wouldn’t be a surprise if he takes his game to the next level, becoming the best in the world in the coming years. Watch out for this talented American kid in the upcoming regional and global tournaments.

These are some of the best players in the world when it comes to PUBG. They have been consistently performing both at the global and regional stage for their respective teams and nations.

PUBG is one of the biggest names in the esports division. Players from different parts of the globe have been trying to master this battle royale so as to rise through the ranks on the biggest stage of them all.

The list is solely based on our opinion and may differ for others. For instance, many people think that Ubah, Kaymind, Ibiza, and Pio should be left out of such lists as they have cemented their place in history as the GOATs of PUBG with what they have achieved in the game over the years.

We hope that this blog has everything that you were looking for.

Up until next time! Go break some eggs.