News » Anime » Haikyuu: Season 5 News, Recaps, and How Volleyball Has Changed With Karasuno

Haikyuu: Season 5 News, Recaps, and How Volleyball Has Changed With Karasuno 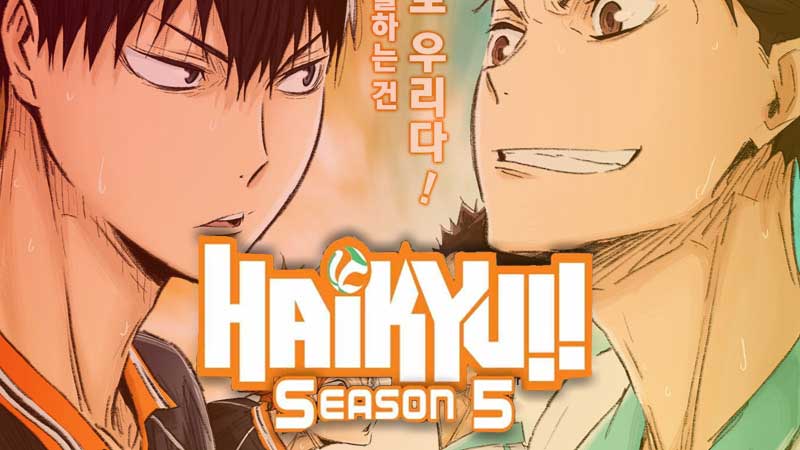 Disclaimer:  All the information mentioned in this blog is for the sole purpose of educating the audience about the upcoming season of Haikyuu. We do not, in any way, are connected or associated with the production or the public relations team of Haikyuu and all the information offered has been taken from reliable web sources.

If there is anything that Haikyuu has taught us about sports and life, it is that you do not win alone…

Haikyuu is quite possibly the greatest sports anime to exist and this is not coming from someone who watches “the way of the ace” every day for two hours straight, but from fans all over the globe who are simply in awe of the charismatic players and of course our very own underdog, Hinata Shoyo.

It has been more than 20 months since season 4 of Haikyuu aired and ever since then, fans have been waiting for the new season of Haikyuu. Sadly, we are here to tell you that it is going to be a long wait as there are no official confirmations for the broadcast of the next season, but we can take a stroll down the memory lane by talking about what happened the last time Karasuno stepped foot on the holy grounds of Volleyball.

This blog will offer information on Haikyuu’s upcoming season, the influence of the show on teenagers and players, and what the future holds for the fans of Haikyuu.

Season 4 revolves around the Karasuno Volleyball Club and how Hinata feels left out after he, along with his team, pulled off the impossible by defeating Shiratorizawa Academy at the Miyagi Prefecture Spring Tournament Qualifiers.

During the time that they were preparing for the upcoming nationals, the King of the Court, Tobio, Karasuno’s setter is invited to the all Japan training camp, while Tsukkishima, the gigantic middle blocker is invited to a special rookie training camp for first years, hosted in the Miyagi prefecture itself.

Hinata feels the sudden need to make himself of use and tries to sneak into the camp for the first years when he is confronted by Tsukki and the head coach of Shiratorizawa who, in a very rude manner, states that without the brilliance of Kageyama’s tosses, he doesn’t see any worth in him.

He decides to attend the camp as a ball boy and tries to learn as much as he can by observing every other player around him. He seeks advice from other players and tries his best to close the gap between him and his eternal rival, Kageyama, even though Kageyama is miles ahead of Hinata, as it currently stands.

The second part of season 4 revolves around the intense match between Karasuno and Inarizaki. Many deem it to be the toughest challenge for Karasuno up till now since Inarizaki were among the top favorites to win the nationals.

Led by their powerful twins’ duo, the Miya Twins, Inarizaki seemed nothing short of the perfect squad, with middle blocker Rintaro Suna, Ace, Ojiro Aran, and the unwavering captain, Kita. It was a slow start for the crows, as handling Miya Atsumu seemed difficult for the better part of the game.

Atsumu kept targeting the guardian deity of Karasuno, Nishinoya, who for all his attempts felt powerless as he was unable to make good any of the jump float serves that came his way.

But Karasuno moved toe to toe with the contenders as Tsukki gave Rintaro a tough time from the other side of the court while Tanaka, the left-wing spiker found it difficult to get past the wall of Inarizaki’s defense.

It didn’t take long for the Miya twins and the whole squad of Inarizaki to find out that Hinata Shoyo was a threat. Hinata caused all sorts of problems and even though the quick freaks didn’t sync in the first couple of tries, eventually they both geared up and wreaked havoc on the opposition with quick attacks from all sides of the court.

The question that comes up now is when is Haikyuu season 5 coming out? Let us get into the details of the same.

The Plot for Haikyuu Season 5

Season 5 will be a topsy-turvy ride for the players of Karasuno. The team will face off against Nekoma in the nationals, the much-awaited battle of the garbage dump, with plenty of other high stake matches coming up in the season.

The main attraction will be the moment when Hinata gets to meet the ace that made him dream in the first place, the Little Giant himself. Apart from this, the most anticipated time skip may be or may not be in the Season 5 of Haikyuu, but it will be there in the coming seasons of the viral Volleyball show.

Fans from all parts of the globe grew curious ever since season 4 ended with Inarizaki crashing out of the nationals, suffering defeat by the very hands of Karasuno Volleyball Club. Ever since then, the whole world has been waiting for the release date of Haikyuu season 5.

Sadly there have been no such solid announcements as of now and Haikyuu stans are still waiting for the confirmation of the show. Haikyuu season 5 will turn a lot of heads, especially as it focuses on how the team of Karasuno and other powerhouses change after they face extreme situations.

Is Haikyuu over? By no means, since the manga has been completed, and we are only halfway through the manga with as many as 200 episodes of the manga still remaining, there are chances that the final season of Haikyuu may very well be the Haikyuu Season 6.

Brace yourself for a roller coaster ride, witnessing your favorite stars battling it out for the ultimate glory in Japanese Volleyball.

This heated debate has been in existence for quite some time now, and different people have different takes on the whole debate. Some say that the show is pretty realistic and offers a sense of hope for kids who are looking to become professional volleyball players.

Others feel that some characters are too far-fetched and perfect, which actually leads to the non-playing community that this is how an ideal player should look in real life, but what they forget to mention is that the likes of Kageyama and Hinata only exist in the animated version.

Let us better help you understand this with the help of an example. When fans decided to research more about their favorite underdog, Hinata, it was found that Hinata has a vertical of 48 inches (1.22 m).

If we overlook the fact that the feat is pretty hard to achieve in itself, the idea that Hinata is only 14 and still growing seemingly tells the viewers that it is impossible to attain such feats of physical athleticism at the tender age of 14.

This is one of the major reasons why people often criticize Haikyuu as soon as they are able to see the vertical of Hinata, which seems completely ridiculous.

Not only that, but the kind of tosses that Kageyama produces out of the blue in Haikyuu is hard to imagine for professional setters as well, let alone kids who are starting out with their volleyball journey.

All this goes to show that most of the things that are shown in the anime are not possible in real life and one should take it as it is, a fictional creation made purely for joy and entertainment.

But this does not mean that Haikyuu has not had a positive impact on the youth and the professional players.

Impact of Haikyuu on Volleyball Professionals

Even though Haikyuu seems to create a sense of disbelief about the kind of things that are possible on a volleyball court, it won’t be an exaggeration to say that it also brings out the best in plenty of fans due to the perfectly captured moments that resemble real-life team sports.

The joy of playing together as friends, being enemies on the pitch but practicing together as if they are best friends from the start, building trust with time to guide the team when times are tough.

This statement can be justified by the countless instances where professional volleyball players have expressed their heartfelt joy about the show and how they feel connected to the anime.

Japan’s very own Hinata, Nishida, their star ace has often told the interviewers numerous times that he is in love with the anime and often finds himself in positions during intense matches where he feels the need to score as he wants to make good on all the faith that his teammates have put in him.

Plenty of other players from different nationalities including Brazil, Hungary, and France have also been asked similar questions about the show, and they have always had a smile on their faces as soon as the name Haikyuu comes up.

The anime has become the perfect example of how having friends and determination can take you to places in life, no matter the circumstances.

Now that we have seen what Haikyuu is all about, let us take a look at some of the most popular questions about viral anime.

Q.1 What is the main match in Haikyuu season 5?

Ans-1: A lot of great matches await the fans of Haikyuu, but the most anticipated one will be the battle of the garbage dump, where Nekoma and Karasuno will face off. The match won’t be unlike any other matches in Haikyuu and every moment will be filled with thrill and intensity. What is even more important is that this match marks the start of the unique character development that Hinata, the star decoy of Karasuno will go through later in the show.

Q.2 Where can I watch season 5 of Haikyuu?

Ans-2:  Season 5 of the intense anime will be available on OTT platforms such as Netflix and Crunchyroll. Other illegal platforms will also offer all the episodes, but it is recommended that you resort to legal methods.

Q.3 Who is better, Kageyama or Oikawa?

Ans-3: This may be a hot take, but Kageyama is better than Oikawa in terms of a pure setter. Even Oikawa himself has said that his student is better than him when it comes to making plays possible. Although Oikawa gets the better of him in every other department, except for that one that matters the most.

Q.4 How many seasons does haikyuu have?

Ans-4: As it stands, a total of four seasons have aired and 2 or 3 more seasons are on their way. There are also rumors that a movie is in production for Haikyuu where the later parts of the manga will be covered.

This is it from our side, fellow ballers. We hope that you enjoyed this little segment and have all the answers that you were seeking.

Up until next time. Fly!